All about Desexing your Pet

Pets should be fasted prior to being admitted – so this means no breakfast on the day of the surgery, and no food after their evening meal the night prior. They can still have access to drinking water through this time.

Benefits of desexing your pet

Sydney Animal Hospitals recommends that you have your kitten or puppy de-sexed, and our veterinarians can provide specific advice on the best age to have your pet desexed based on their breed and species.

Desexing your cat can have health benefits and reduces the likelihood of them roaming and being involved in fights or accidents. Here in NSW, the State Government has introduced regulations that require payment of an annual fee for non-desexed cats aged from four months of age and older. Improving desexing rates will ease the burden on pounds and shelters, reduce euthanasia rates, and help to address concerns about feral, stray and roaming cats and their effect on wildlife.

When your pet is admitted into the veterinary hospital to be desexed, they will initially be given a premedicant drug which relaxes and sedates them. Then the animal is induced into a general anaesthetic and the surgery site is clipped and cleaned ready for surgery.

With male cats, the desexing surgery site is on the scrotum and usually no sutures are required. After a desexing surgery, it may be recommended that your pet wear an Elizabethan collar to prevent them from licking the surgery site. It is important to keep your pet rested until the sutures have been removed, as vigorous activity can sometimes lead to post-operative complications such as bleeding or swelling of the surgery site.

If you have any concerns about your pet after their desexing procedure, it is recommended to contact the Sydney Animal Hospitals team for further advice. 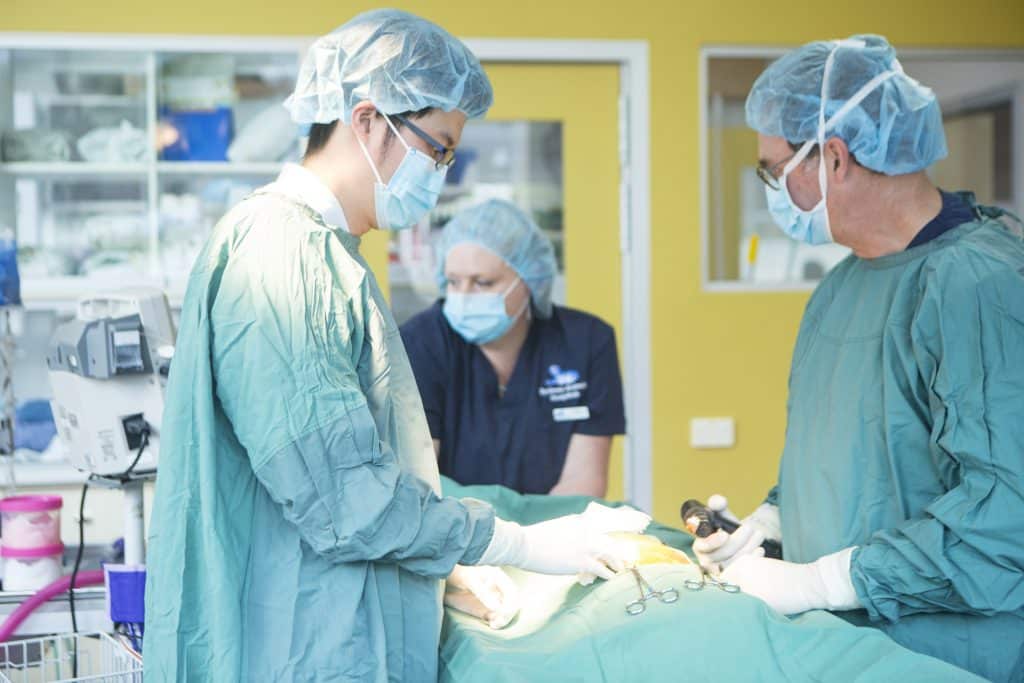 When your pet is under a general anaesthetic for desexing, there are several other procedures which may be recommended by your veterinarian based on the individual circumstances of your pet.

Dew claw removal involves the surgical removal of the dew claws, which grow on the lower part of the inner leg of dogs. Dew claws are like a vestigial thumb, and the dew claw keeps growing but doesn’t wear down like the other nails on the paw, so they require regular clipping. Overgrown dew claws can be torn or injured, or they may become ingrown into the pets skin, which is painful and can lead to infection.

Dew claw removal is only recommended for medical reasons and your veterinarian will be able to assess your pet and advise you further on whether it is an appropriate procedure to consider for your pet. If dew claw removal surgery is recommended, whilst your pet is under the general anaesthetic for desexing, the dew claws can be surgically removed, and the skin sutured closed. In some cases a small bandage may be applied to protect the surgery site and prevent the pet from licking the surgery site. 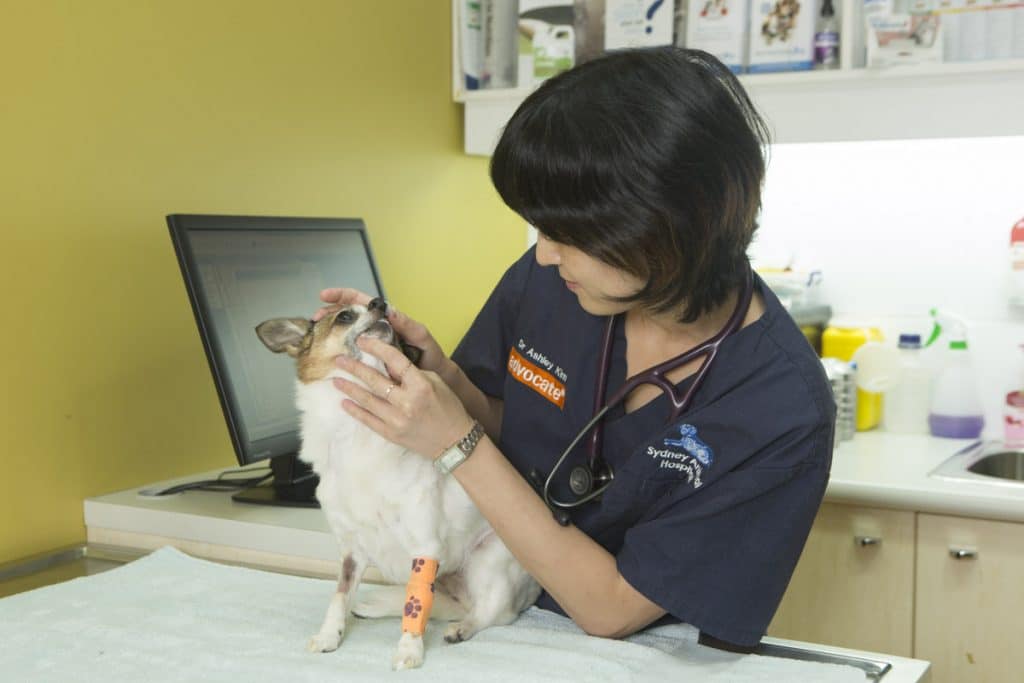 When your pet is under a general anaesthetic for desexing, the veterinarian will also check their mouth and teeth. Puppies usually lose their deciduous or baby teeth by four to six months of age, as these teeth are replaced by adult teeth. However if any deciduous teeth are still present at the time of desexing, the veterinarian will usually recommend that these retained baby teeth are removed.

Removal of retained deciduous teeth is a common procedure – especially in dogs, and by removing these baby teeth, this allows room for the adult teeth to erupt normally through the gums of the mouth.

Sometimes pets, especially dogs, may develop an umbilical hernia – which may look like a small lump at the site of their belly button or umbilicus. An umbilical hernia is when there is a protrusion of fat tissue, or sometimes part of an abdominal organ, through an open umbilical ring – which is when the abdominal muscles don’t completely meet, leaving a small opening through which the fat tissue or part of an abdominal organ may protrude.

The veterinarian will assess your pet for an umbilical hernia as part of their physical examination during a consultation. Umbilical hernias are common and many may not cause any problems at all, and depending on the size or the hernia, they can reduce and disappear as the puppy grows.

In these dog breeds, they have narrow nostrils and an elongated soft palate which can cause breathing problems that get progressively more severe as the dog gets older. Together, the narrow nostrils and an elongated soft palate, increase the negative pressure during breathing which results in chronic inflammation and swelling within the upper respiratory tract, leading to eversion of the laryngeal saccules (located adjacent to the vocal cords ) and collapse of the larynx – which obstructs airflow.

Brachycephalic obstructive airway syndrome is diagnosed through a combination of during a physical examination the veterinarian may identify that the dog has narrow nostrils, called stenotic nares. A general anaesthetic is required to diagnose an elongated soft palate and everted laryngeal saccules, and x-rays are often useful for assessment of the airway and chest.

In dogs predisposed to brachycephalic obstructive airway syndrome, surgery to improve the condition involves widening the nostril openings to increase airflow. Surgery can also shorten the long soft palate. This procedure should ideally be performed between six and 12 months of age before any secondary changes have occurred.

Our protocol at Sydney Animal Hospitals is to widen the nostrils and/or shorten the soft palate of these patients at the time of desexing or before two years of age. These procedures will often make a significant difference to these pets’ ability to breathe in the long term and prevent any secondary components from developing.

We often recommend nostril widening at the time of desexing as this single procedure has been shown to make a significant improvement in air flow, and is easily done at the same time as the desexing while your pet is already having a procedure performed under a general anaesthetic.

If the laryngeal saccules are everted as part of the brachycephalic airway syndrome, the saccules can sometimes be surgically removed at the same time as the elongated soft palate is resected, or the saccules may sometimes be left and allowed to return to a more normal position. 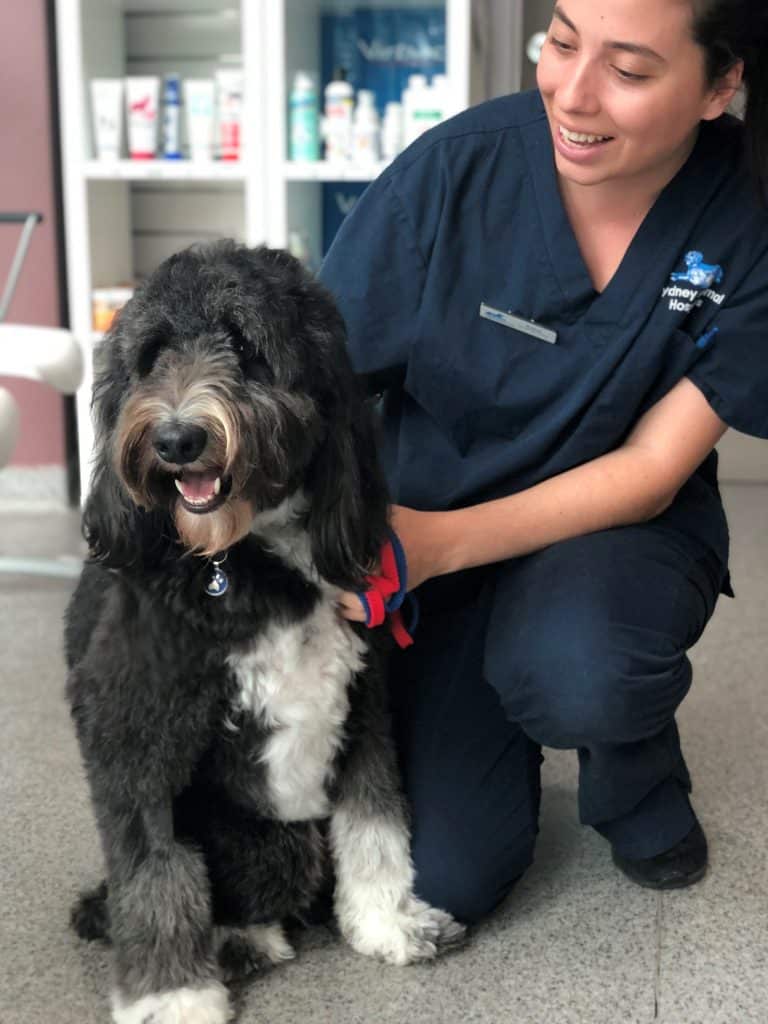 Gastric dilation and volvulus (GDV), more commonly known as bloat, is a life threatening condition that can affect dogs, especially larger breeds. Large dog breeds with deep, narrow chests, like Great Danes, German Shepherds, Weimeraners and Dobermans, are more likely to develop GDV. The GDV condition refers to when the stomach becomes distended with gas and then twists, which disrupts the blood supply to the gut and some adjacent organs.

The Rapid Recovery Pack is a surgical care package designed by Sydney Animal Hospitals to ensure that your pet remains as safe possible during any general anaesthetic and surgical procedure, and has a rapid and comfortable recovery.

As part of the Rapid Recovery Pack, if your pet is due to have a general anaesthetic – we recommend that they have a pre-anaesthetic blood test, intravenous fluid support during the procedure and post-operative medications to maintain their comfort.

A pre-anaesthetic blood test is an internal health check for your pet, which allows us to look for any underlying conditions or diseases that may affect the animal’s health or the surgical procedure. If we detect an underlying condition, we will change the way that we administer the anaesthetics and supporting medication during and after the procedure.

Intravenous fluid support helps to keep your pet hydrated during the surgical procedure, and also works to flush any toxins out through the liver and kidneys. Post-operative medication will include pain relief to ensure that your pet has a comfortable recovery.

If you have any further questions about having your pet desexed, please speak with one of our friendly team.