You might have heard about a tick-borne disease in dogs called Ehrlichiosis, and apart from being a difficult word to pronounce – we wanted to explain a bit more about this disease and how you can best protect your pet.

Brown dog ticks occur across Australia, however the Ehrlichia canis bacterium has only been detected in ticks in certain areas – including in the Northern Territory, northern parts of Western Australia, and in South Australia. Ehrlichiosis has recently been identified in a small number of dogs in NSW, however all of the affected dogs had travelled to other areas of Australia where Ehrlichiosis is an emerging disease.

Ehrlichiosis was first confirmed in Australia in mid-2020, with initial outbreaks detected in the Kimberley region of Western Australia and in parts of the Northern Territory. There are movement restrictions in place for dogs travelling into or out of these areas.

Infected dogs do not transmit Ehrlichiosis to other dogs or people, however in very rare cases, infected ticks may infect people – and there is more information about the human health impacts of ticks on the WA Department of Health website.

The spread of the disease is of particular concern to remote Indigenous communities, and the animal health organisation Animal Management in Rural and Remote Indigenous Communities (AMRRIC) has some fantastic information about Ehrlichiosis on their website including a short video animation.

When a brown dog tick infected with Ehrlichia canis bites a dog, the bacterium enters the dog’s white blood cells and multiplies rapidly, however the signs of illness will only become noticeable about two weeks after transmission.

The signs of the Ehrlichiosis disease in dogs can vary, and can include:

If you have any concerns about your pet, it’s important to seek veterinary attention as soon as possible. Depending on the extent of the disease, diagnosis involves a blood test, and treatment may be possible with antibiotics and supportive care.

Protecting your pet against Ehrlichiosis

To help prevent Ehrlichiosis, dog owners should maintain their dogs on a tick control program. The best tick control products are those that are topical, which kill the tick before it bites and also have a residual action. Research has shown that effective tick collars repel ticks and stop them attaching in the first place, and so these are the best way to prevent Ehrlichiosis.

So protecting your dog against Ehrlichiosis involves using a tick prevention product that will quickly kill any ticks that attach to your pets skin. Products which contain rapid acting topical compounds such as flumethrin and permethrin – found in Seresto tick collars and Advantix spot-on respectively, will provide the best protection for your dog.

These products kill and repel ticks before they are able to attach and feed – which is critically important in relation to Ehrlichiosis because the bacterium Ehrlichia canis that the ticks carry, is transmitted within about 3 to 6 hours of tick attachment.

Use of regular tick prevention products such as Nexgard or Bravecto are also recommended to protect your dog against ticks – and whilst they may not be 100% protective against tick-borne diseases, these products are very effective at reducing overall tick numbers and are therefore still useful in reducing the risk of dogs contracting tick-borne diseases.

These chewable products are recommended to prevent paralysis tick which occurs along the east coast of Australia, and you can find out more information about this condition here.

Therefore for general tick prevention, the use of oral tick prevention such as Nexgard and Bravecto is always recommended, and if you are concerned about Ehrlichiosis, then a tick collar like Seresto or Advantix is recommended – remembering that the risk of Ehrlichiosis in NSW is currently low – apart from dogs which have recently travelled from the high risk areas of WA, SA and NT.

It is also advisable to avoid taking your dog to tick-infested areas, and if your pet is visiting a high risk area – such as the Northern Territory, northern Western Australia or northern South Australia, then there are movement restrictions in place to be aware of, and a tick collar is a must.

It’s also really important to check your pets coat for ticks every day, especially if you have been holidaying out bush or in areas known for having ticks. 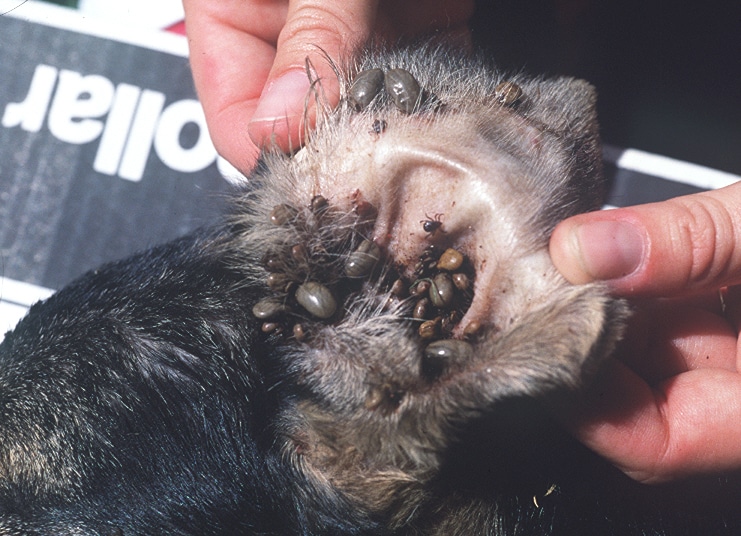 If you have any further questions about Ehrlichiosis in dogs please speak with one of our friendly veterinary team.