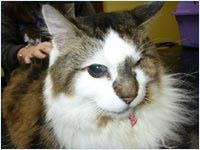 Scout was a middle-aged domestic short-hair cat who was hit by a car.

Scout had sustained severe facial and pelvic fractures and one of her eyes was beyond repair and the other had sustained nerve damage.

She had multiple wounds over her body. She could not stand, was having difficulty sustaining normal blood pressure and her facial injuries were causing problems with her breathing.

Scout was placed on an intraveous drip, was given pain relief and antibotics. She had a nasal oxygen catheter placed to aid in her breathing. She was given special drugs to help support her blood pressure. Scout was stablised over the next 24 hours. Once stable she underwent surgery to repair her fracutred jaw, removed the prolapsed eye and to stabilse her pelvic fractures.

After surgery Scout stayed with us for nearly two weeks. During this time she visited the opthalmologist specialist who preformed a retinal scan. The retina was found to be damaged beyond repair meaning that Scout was now completely blind.

Scout was taken home to finish recovery. Initially Scout’s new blindness and other injuries caused her stress and she started to overgroom, removing all her coat. She was placed on anti-anxiety drugs for a couple of months and this behaviour resolved. Scout had further surgery to removed the wires that had stabilsed her jaw.

Scout continued to improve and eventually her jaw totally mended, as did her pelvis. She got used to her blindness and could run around the house at full speed, jumping on and off furniture with ease. In fact, she got so good that the owners had to place a harness with a rope of her when she went outside as she would climb the fence and try and jump over. Nothing seemed too hard for this cat.

It has been five years since her accident and Scout continues to lead a happy life and to be an inspiration.