Sydney Animal Hospitals recommends Obstructive Airway corrective surgery in most Brachycephalic breeds. The procedure is preferably done at a young age – we do most corrective surgeries at the time of desexing or within the first 18 months of age. All dogs need assessment, which is generally done during the vaccination consultation, or on admission for desexing.

It is important to improve these patients’ airways at a young age, before chronic changes have occurred and the condition has become more refractory.

When booking in your pet for puppy vaccination or desexing please inform staff that you are considering airway surgery.

Brachycephalic dog breeds – or short-nosed breeds, are those which typically have a relatively broad and shortened face or skull, with the resulting distortion of the soft tissue structures involved in breathing causing the dog to experience breathing problems. Brachycephalic means short-headed. 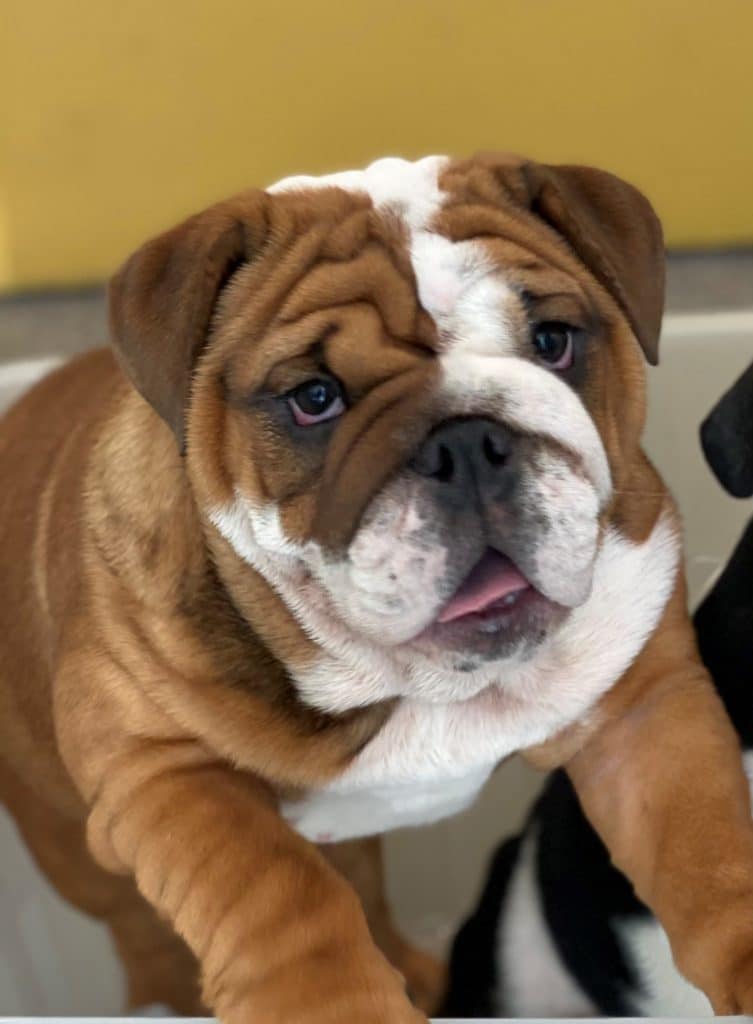 In these dog breeds, their narrow nostrils and elongated soft palate cause breathing problems that get progressively more severe as the dog gets older. Brachycephalic airway syndrome is made worse by exercise, heat and obesity. Because of their shortened muzzle and relatively flat faced head structure, in these dogs the obstructing tissues of the airway stretch the ligaments in the larynx leading to severely laboured breathing and eventually, collapse of the larynx altogether.

To explain this a little further, in dogs with brachycephalic airway syndrome, they suffer from stenotic nares, which refers to their malformed or restricted nostrils that collapse inwards when the dog breathes in. These dogs also have an elongated soft palate which is the fold of soft tissue sitting behind the bony roof of the mouth or hard palate. The palates play important roles in swallowing, breathing and vocalisation, and if the soft palate is too long, the tip of it protrudes into the airway interfering with the movement of air into the lungs.

Together, nasal stenosis and an elongated soft palate, increase the negative pressure during breathing which results in chronic inflammation and swelling within the upper respiratory tract, leading to eversion of the laryngeal saccules and collapse of the larynx.

The everted laryngeal saccules, refers to the tissue within the airway just in front of the vocal cords, which is pulled into the trachea or windpipe, partially obstructing airflow.

The commons signs of brachycephalic airway syndrome in dogs include difficulty breathing and snoring. These symptoms are made worse with exercise, excitement, periods of hot weather, and if the animal is overweight.

Affected dogs may not be keen to exercise, and they can have collapsing episodes or display a blue tongue and gums from lack of oxygen – referred to as cyanosis. Many dogs with brachycephalic airway syndrome will often prefer to sleep on their backs, as this position may help keep their airway more open.

We often see these dogs at the vet hospital when they are in severe respiratory distress or suffering from heatstroke when they may have collapsed.

In terms of diagnosing this condition, in addition to if your pet is one of the at risk breeds, during a physical examination by one of our veterinarians, they can diagnose stenotic nares. A general anaesthetic is required to diagnose an elongated soft palate and everted laryngeal saccules, and x-rays are often useful for assessment of the airway and chest.

The veterinarian will discuss the options available for further assessment, including advising you of the risks associated with anaesthetising brachycephalic dogs.

In patients with brachycephalic airway syndrome, early correction of the closed nostrils and long soft palate will dramatically reduce the resulting secondary changes that occur over time. Young animals have a good prognosis following surgery and will generally be able to breathe more easily afterwards.

Images below show a before and after of soft palate resection 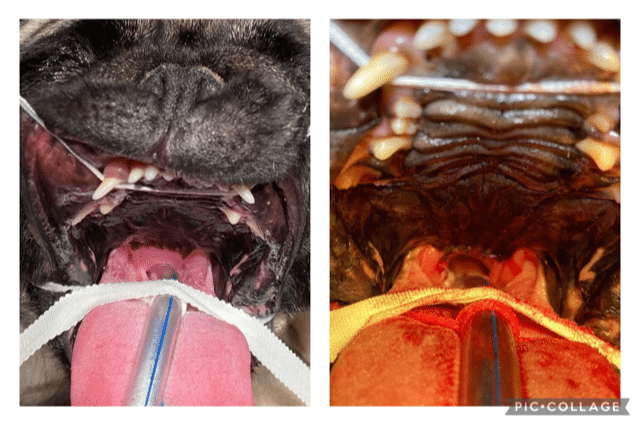 In dogs predisposed to brachycephalic airway syndrome, surgery to improve the condition involves widening the nostril openings to increase airflow. Surgery can also shorten the long soft palate. This procedure should ideally be performed between six and 12 months of age before any secondary changes have occurred.

Our protocol at Sydney Animal Hospitals is to widen the nostrils and/or shorten the soft palate of these patients at the time of desexing or before two years of age. These procedures will often make a significant difference to these pets’ ability to breathe in the long term and prevent any secondary components from developing.

Image of Abel before and after nostril widening

We often recommend nostril widening at the time of desexing as this single procedure has been shown to make a significant improvement in air flow, and is  easily done at the same time as the desexing while your pet is already having a procedure performed under a general anaesthetic.

If the laryngeal saccules are everted as part of the brachycephalic airway syndrome, the saccules can sometimes be surgically removed at the same time as the elongated soft palate is resected, or the saccules may sometimes be left and allowed to return to a more normal position.

In dogs with excessive skin folds around their face, it is also common to have these folds surgically corrected – so a bit like having a canine facelift, which can reduce the occurrence of skin issues such as skin fold dermatitis.

Image of Doug the pug before and after his canine facelift 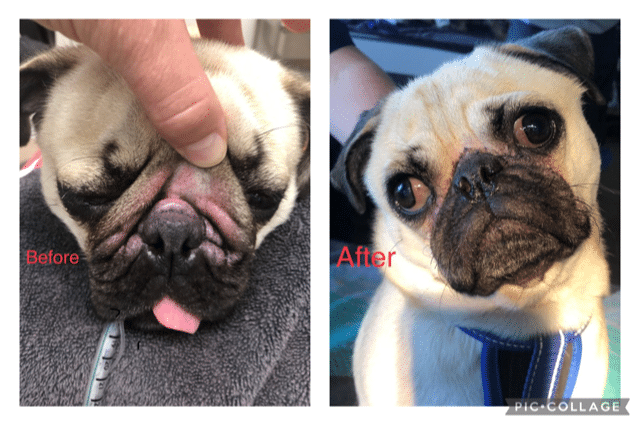 Due to the breathing difficulties associated with brachycephalic airway syndrome, dogs that undergo surgery must be closely monitored both during the general anaesthesia and afterwards as they recover. One of our veterinarians will explain more about any surgical procedure and the after care that is required, when they discuss your pet’s treatment and care with you.

Please inquire about your options if you are concerned with your dogs breathing problems at your local Sydney Animal Hospitals on;